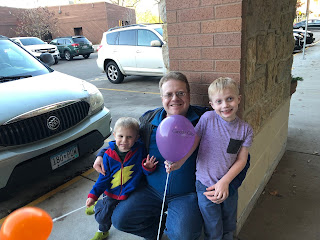 I am sorry to report that the cold that began last week has stuck around. Lemon developed a pretty bad cough over the course of the week. "Luckily," school was closed on Thursday so we had him at home to do extra therapy, and then decided to keep him home on Friday also since he was feeling fairly miserable. Even with all the extra therapy every day through today, he hasn't quite managed to shake this thing off yet. Which of course means a week or so of essentially zero tube feedings, since he's been coughing too much to tolerate them. Which of course means that as of this morning's weigh-in, he's lost essentially all the weight we put on him in the summer. And December hasn't started yet, never mind the whole period encompassing January-March. So, I'm not feeling like we're in a great position, nutrition-wise, at the moment. 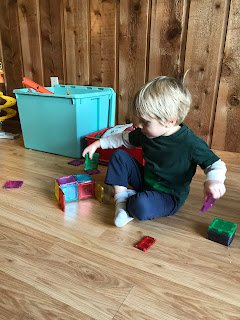 The silver lining, if you could call it that, is that I do think Lemon is starting to turn the corner on this without us needing to resort to antibiotics. I've been hesitant to start them for all the usual reasons, compounded by the fact that he was just on them within the last few weeks, and I don't like the idea of having two courses so close together. I mean, if he needs it he needs it, but I'd rather him not need it and I am hoping that in this case, he won't. We decided to defer the decision until Wednesday, which is the first day of the kids' Thanksgiving break. If he is still in a bad way then, we will start, since we will have 5 consecutive days at home where we won't have to do the whole running over to the school in the middle of the day to administer medications thing. 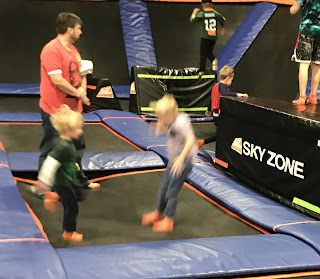 Lime, meanwhile, is largely over it although he still coughs occasionally. And I lost my voice yesterday, but fortunately it is more or less back, given the number of work phone calls I have tomorrow where it would be highly advantageous if I could actually speak. 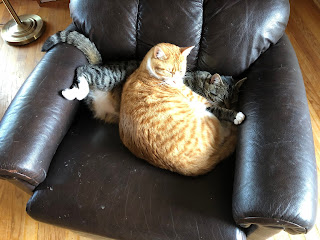 Beyond all the health things, the big event of the past week was Lemon's school conference. I'm glad to say the behavioral issues that his teacher was concerned about at the beginning of the year have lessened. Not gone away entirely, of course, but at least are now within the bounds of what can be expected of a first-grade boy. Maybe just barely within the lower bound, for some things, but as they say in tennis, the lines are in.We still have a lot of room for improvement, and I am still committed to the idea of finding someone to work with Lemon on some of these things, just as soon as I have the time. Whatever his behavioral issues are, they have not interfered with his progress on reading, where he has already achieved the target reading level for the end of first grade, woohoo! 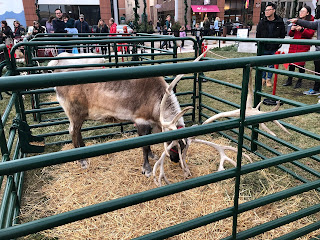 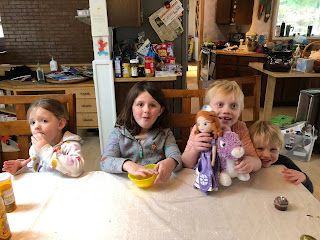 If the week doesn't involve a bad cold and a black eye, is it really a week? These are the questions one ponders as the second half of November commences. Lime is mostly over the cold now, still prone to occasional coughing fits but no longer sounding like an alien and more or less his usual demeanor, all for the low price of several low-sleep nights this past week. Of course, while he was feeling the most poorly, there was an incident that involved Lemon, Lime, and the corner of a table. Accounts as to the exact nature of the incident differ, but all parties agree that it involved the corner of Lime's eye and the corner of the table coming into contact with a certain degree of force. So, if you want to know why my child looks like he was in a bar fight, well, now you know as much as I do. 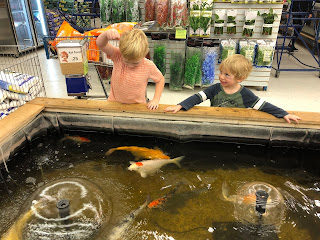 Although I'd held out hope that perhaps Lemon would escape this cold, since he didn't come down with it right away, it appears those hopes were in vain. He started sounding like an alien yesterday, and was pretty miserable when he got home from school today, coughing and exhausted. He had a mild fever this evening as well. So, I loaded him up with ibuprofen before bed and am hoping against hope that maybe he'll just throw this off in a day or two. Fingers crossed. It's tough knowing that the two possibilities for CF and a cold are either getting over it quickly or it kicking off some much more involved cycle of illness. We've been very lucky of late that we've been able to dodge that latter outcome more often than not, but that doesn't mean we've forgotten that it's out there as a possibility by any means. 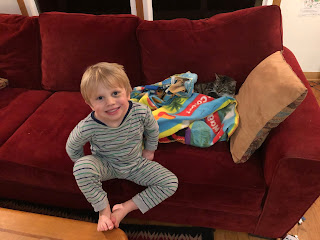 I did finally hear back from our clinic on ranitidine. The response was that they are only changing to a different medication for patients who are on the liquid formulation, and for patients who take pills, like Lemon, they are staying the course unless the patient prefers to switch. So, I suppose we will stay the course for now. I am very reluctant to make any changes to Lemon's digestive regimen since it took us so long to get things working right in that department in the first place. 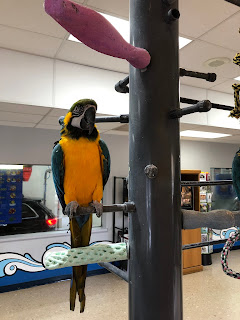 Other than that, I feel that this week provides a good sneak preview of the childcare situation for the coming weeks. Today, the nanny was sick. I fully anticipate that tomorrow Lemon might be home sick. Lime's school is closed Wednesday - Friday. Lemon's school is closed Thursday. And next week is Thanksgiving. A related question--since when does Christmas start immediately after Halloween? Is this a new phenomenon? I feel like for a majority of my life it had the decency to hold off until after Thanksgiving, but maybe things have changed. At least I am not alone in the household in wishing that fall would stick around a little longer--Lime insisted on listening to Halloween music before bed tonight! 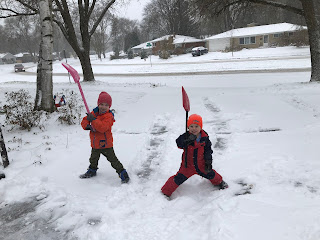 Who doesn't love a little Monday morning snowstorm in mid-November? As an added reminder that winter is upon us, Lime has his first serious cold of the year. He has a cough that reminds one of a wounded seal, and alternates between thinking that it is hilarious that he "sounds like an alien" and being full of woe and self-pity. I am in fact writing this post from his bed, as the latter two sentiments appear to be preventing him from falling asleep. So far (fingers crossed) Lemon seems unaffected and is sustaining his winter baseline of a few coughs and frequent throat clearing. 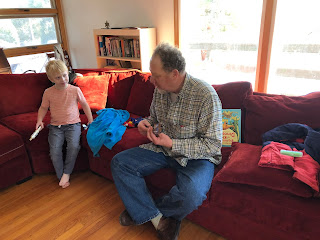 Of course, when our nanny showed up today, she had a bit of a cold, too. At one time in our lives, I probably would have sent her back home to avoid exposing Lemon, but a) see above re Lime, and b) given that Lemon spends every day in the disease incubator known as an elementary school, I can't get too worked up about him being around someone who has a cold but also understands basic hygiene. 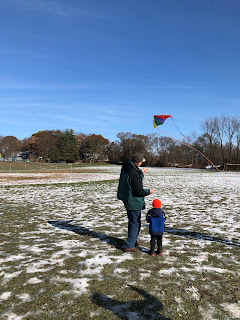 In pharmacological news, some of you may have read that ranitidine (aka Zantac), a medication Lemon has been on for almost 6 years, has been recalled due to contamination with another chemical. We heard about this through the news, and our pharmacist gave Papa Bear a handout about it last time he picked up prescriptions. Who haven't we heard anything from? Our care team at the clinic, who ask me every single time I set foot in the building which medications Lemon is taking. I have a message pending with them to see if we should be switching to something else. Of course, we'd rather not mess with Lemon's digestion, which has been going along fairly well for the last couple of years. On the other hand, we'd rather not be giving him a contaminated medication, either. 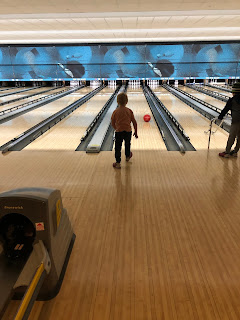 Speaking of digestion, we may finally adjust Lemon's enzyme dose again. He has been doing a single 36,000 unit capsule with meals and snacks for ages, but at our last clinic visit our nurse-practitioner mentioned that he is big enough that two capsules is actually an appropriate dose for him. He's been mentioning stomach aches off and on over these past couple of weeks, and it occurred to us that maybe we really should be doing two capsules at least with larger meals. Lemon is very sensitive to pill burden, though, so we will have to sort of ease him into it gradually. He also does not like taking his 4 evening pills after dinner, so today we had a discussion about switching two of them (his vitamin and iron) to the morning. He was in favor of it so we will give it a try and see how it goes. I feel like there is so little he can have control over, it is important to honor his feelings in those few areas where we do have some wiggle room. His behavior has been a lot better of late and we'd like to do everything we can to keep it that way! 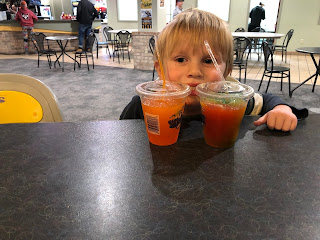 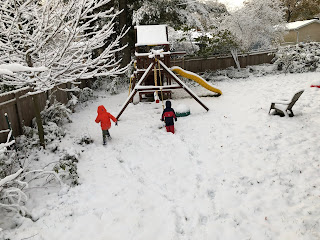 Yet another big week in our household, featuring Halloween followed by my quick trip down to Savannah, GA to run yet another marathon. I'm pleased to report that everything went well, thanks in no small part to Papa Bear who was both chief costume engineer and also managed to keep the household running smoothly in my absence.

Mother nature did try to throw a little bit of a curve ball into our Halloween by dumping 5" of snow on the ground in the preceding days. But, we Sconnies are made of pretty solid stock, and besides, the need for candy trumps cold weather any day of the week as far as certain residents of my household appear to believe. 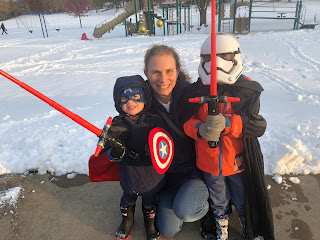 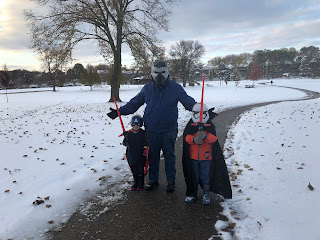 We had hoped to just do 10 days of Cayston this time around, but I felt that at 10 days we were still not all the way back to Lemon's winter baseline, so we kept up through day 14. I'm feeling good now that that was the right call, because after 14 days we really are back at baseline, no more coughing at night. Hooray!

I also got to see one of the cutest little moments played out in the nurse's office for several days last week. I would pull Lemon in to the office as he left the cafeteria, and during the second week of Cayston another little girl from Lemon's class was also stopping at the nurse's office after lunch to do an inhaler. Every day, he would wait for her to finish her inhaler and then the two of them would walk back to class together like little breathing buddies.I think it made him feel like the whole thing was so much more normal, since someone else from his class was doing it too. 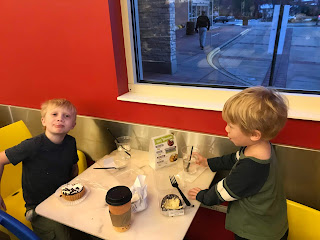 I can also report that Savannah is a really cool city. I had high hopes for the trip after reading "Midnight in the Garden of Good and Evil" (recommend, if you haven't yet) and Savannah did not disappoint. It has amazing trees and parks, tons of history, a river, and a pretty darned nice marathon course if you're so inclined. I'm really glad I made the trip, and also really glad, after a few weeks of non-stop travel,not to be traveling again until 2020! 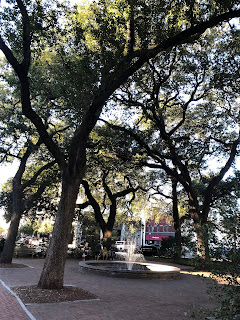 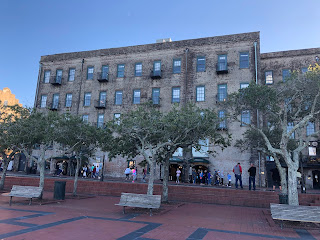 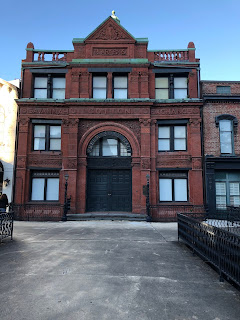 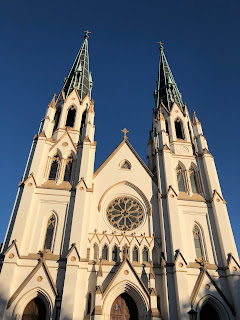 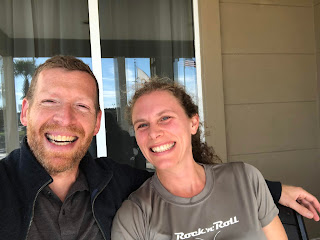 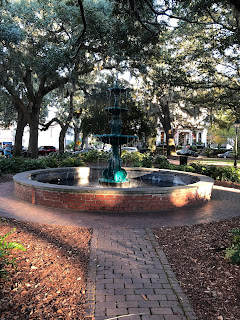