As those of you who have followed this adventure since the beginning are aware, our baby was known throughout his in utero life as "Lemon."  I had signed up for weekly email updates from babycenter.com, and in each email the size of the developing baby was expressed in terms of a familiar fruit or vegetable.  When I saw "lemon" in one of the emails, it stuck.

Lemon was due on August 13, but in keeping with the family tradition of full term babies, decided to delay his emergence for a few days longer.  I went into labor at around 12:30 a.m. on Sunday August 18.  We stayed at home, with periodic phone calls to the hospital, until around 6pm on Sunday, at which point it seemed like things were getting serious.  My dear friend Sheryl stepped in and gave us a ride to the hospital, and remained remarkably calm when our progress to the hospital was delayed by unanticipated road closures.

Upon arrival at the hospital we went right up to the labor and delivery room, where, with no further medical intervention beyond the frequent application of cold washcloths to the forehead and infusions of ginger ale (both largely provided by Lemon's wonderful father), Lemon finally emerged at 3:34 a.m. on the morning of Monday August 19.  My entire pregnancy and delivery was attended by the midwives at Mount Auburn Hospital (mamah.org) and I cannot say enough good things about them.  The entire experience was exactly what I had hoped for.

After Lemon and I had been cleaned up a bit, we were wheeled over to the maternity ward to recover.  On the way, we said hello to Nona (the artist previously known as my mother) who had heroically kept up a vigil in the waiting area since we had arrived at the hospital.  Once we got to our room, I took the best shower of my entire life and then posed for my first picture with our new son. 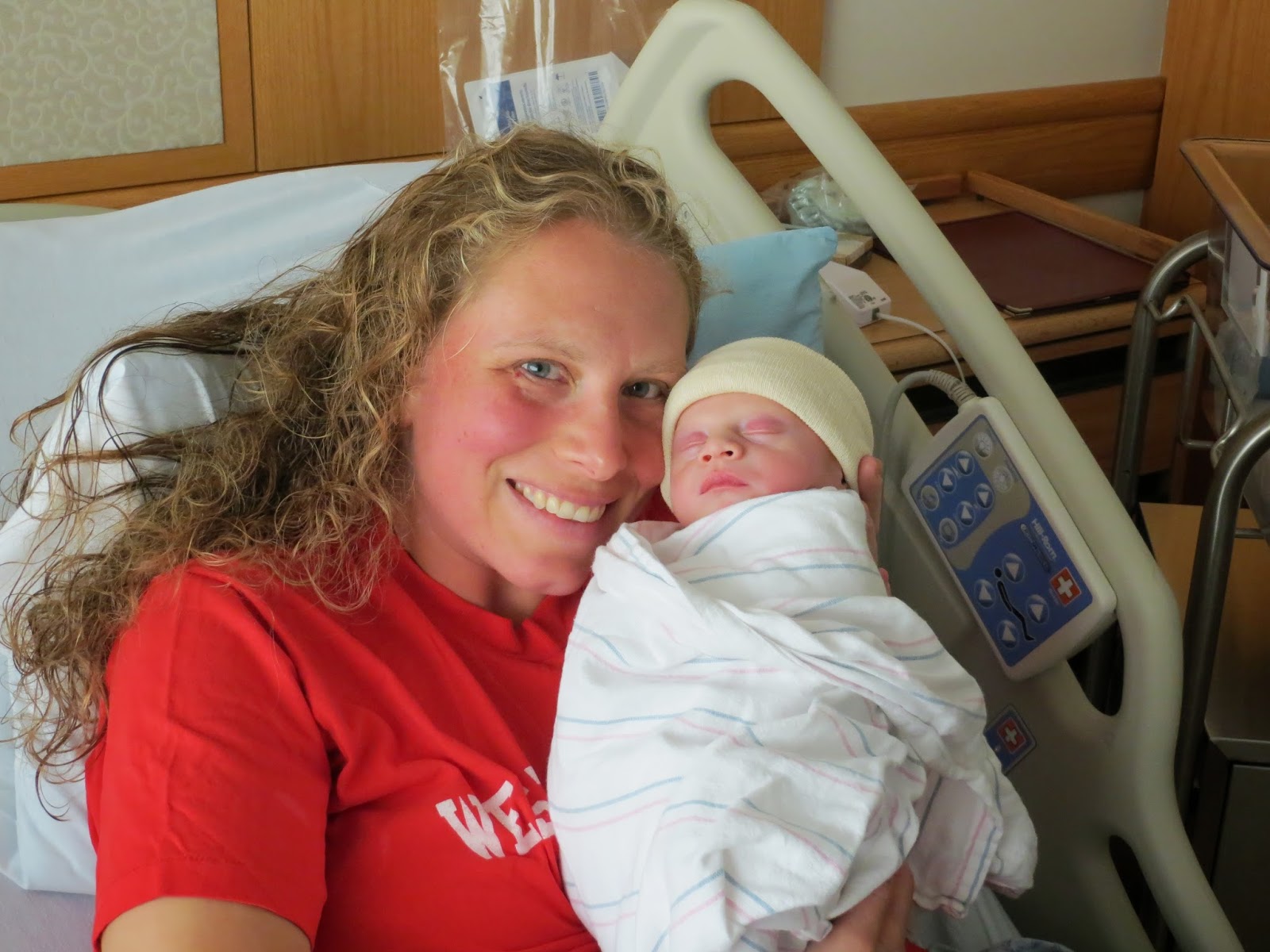 The next 48 hours were a constant stream of kind attention from various nurses and doctors who seemed to want to check my vital signs every 15 minutes or so on the off chance that something might have changed.  Although it wasn't the most restful time for that reason, we felt very well tended to.  We also had our first visitors--Nona returned after a brief nap at home to be properly introduced to her grandson, and "Uncle Jon" stopped by to celebrate with chocolate cigars. 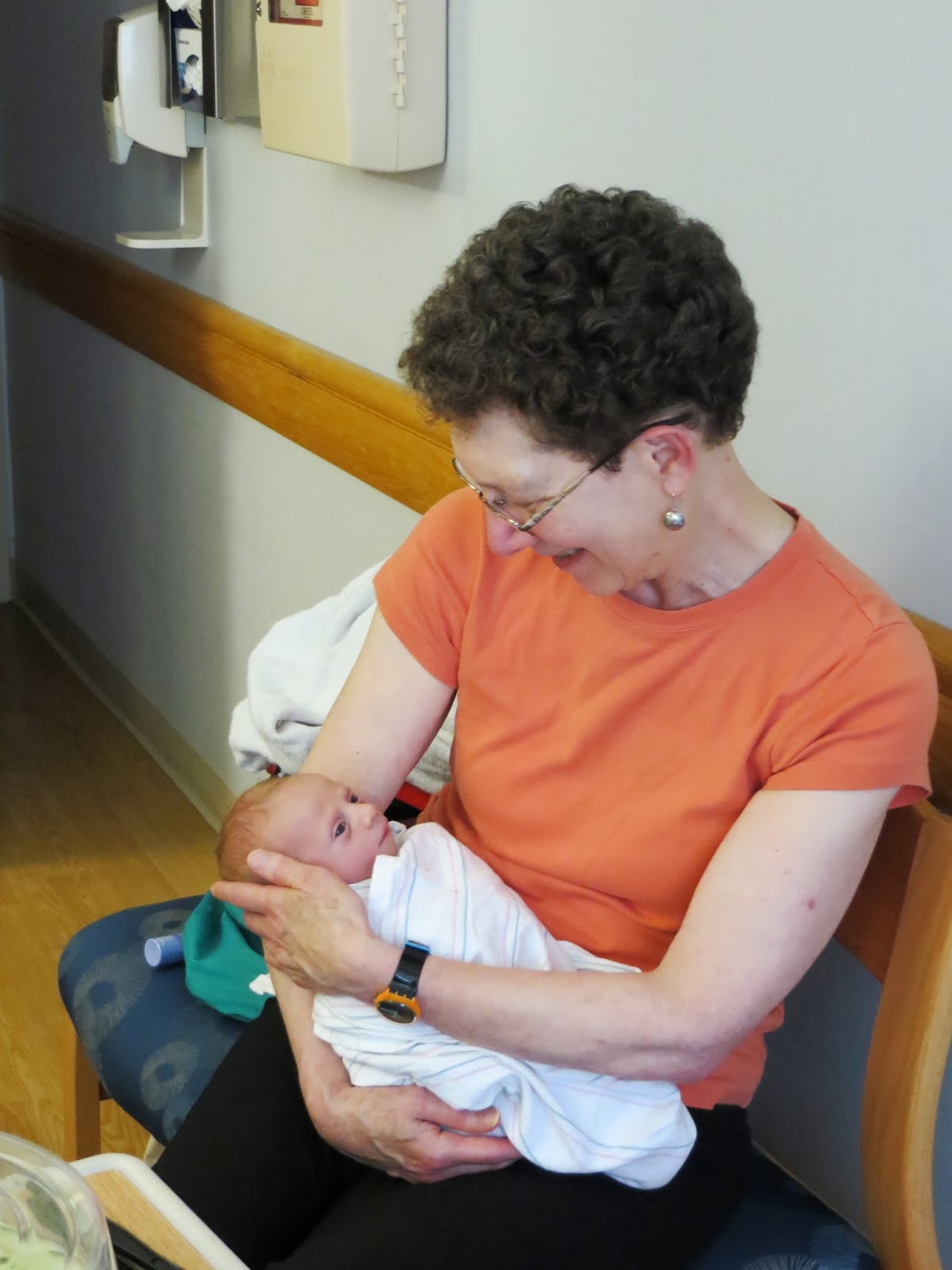 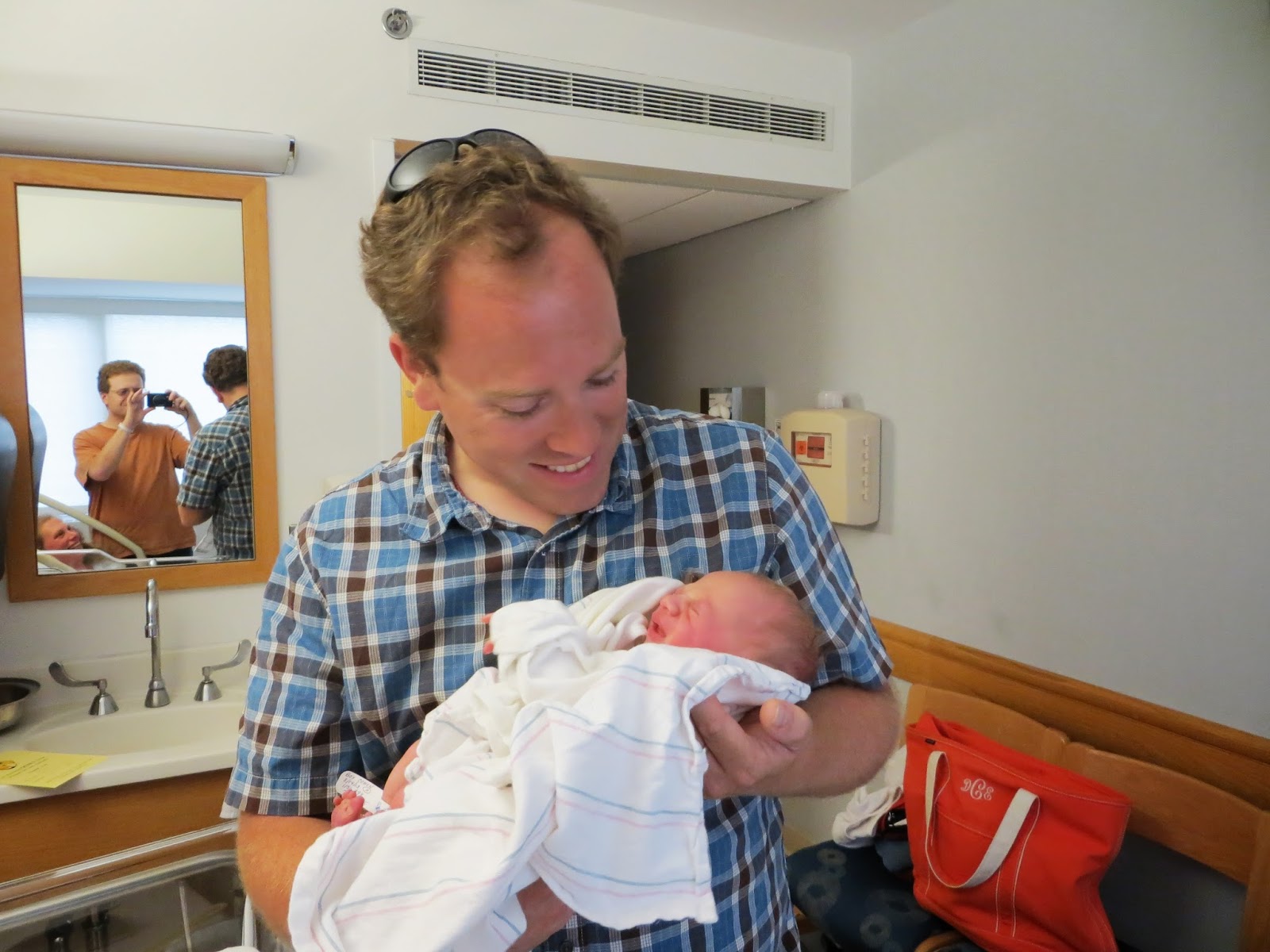 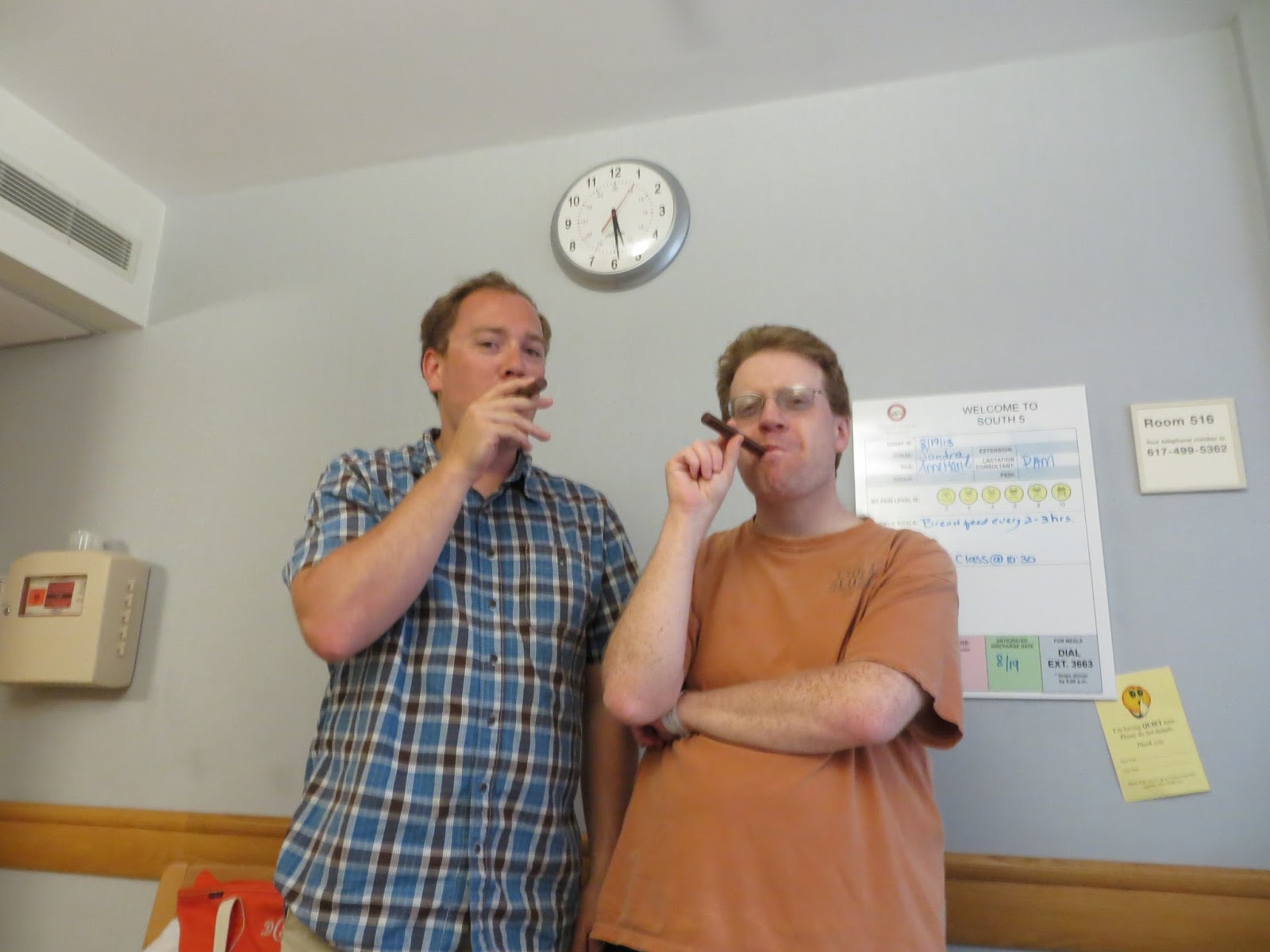 Finally, around noon on August 21, the hospital staff deemed us sufficiently fit parents, snipped the "baby alarm" off of Lemon's ankle, and let us leave the hospital.  Nona picked us up and drove us home to Arlington. 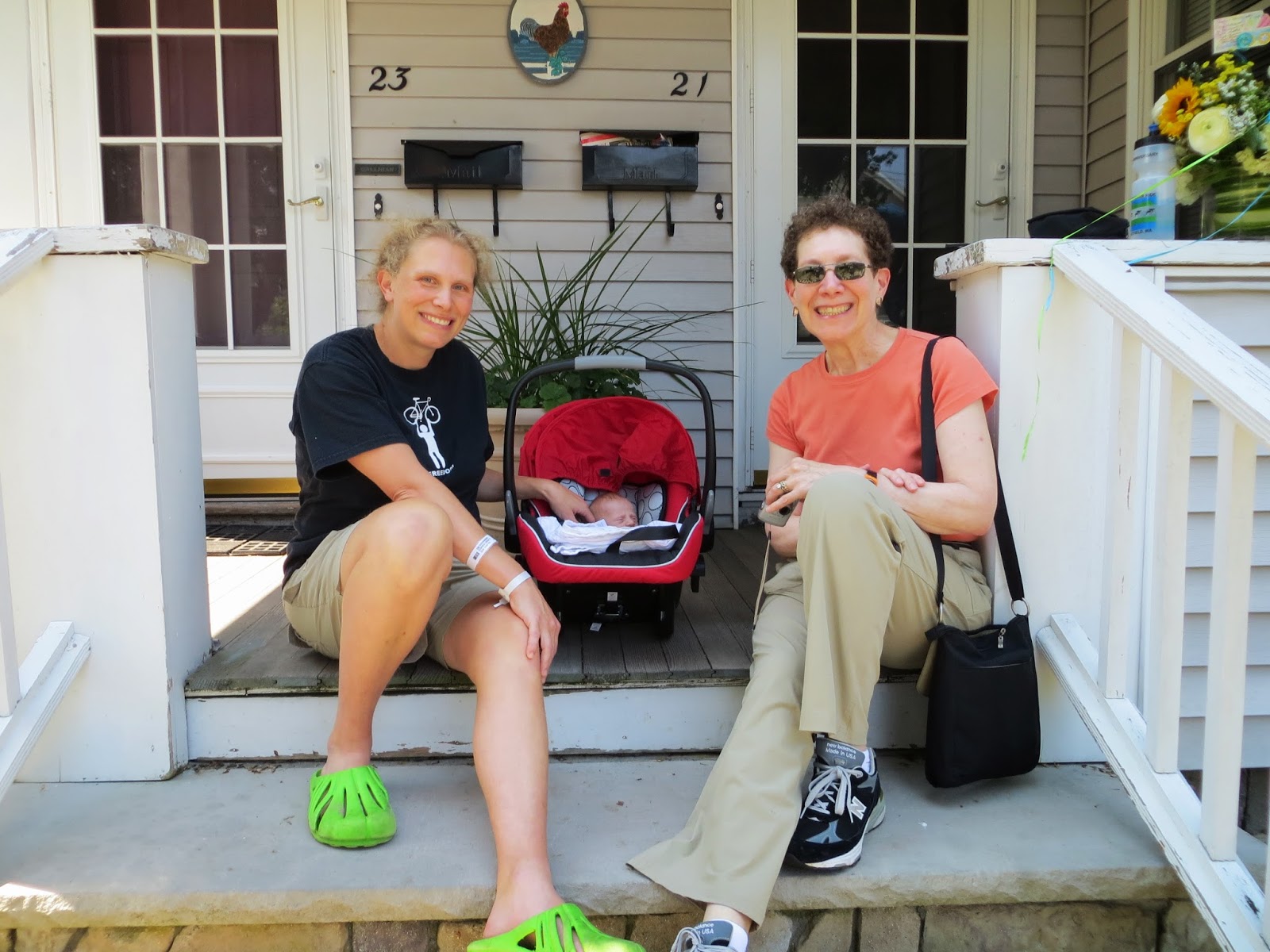 The rest of Week 1 has been a blur of getting used to everything--breast feeding, diapering,and of course that elusive activity known as sleeping.  Overall I can say that the volume, number and frequency of different fluid emissions that are involved in the care of a newborn has astounded me.  It's also noteworthy that while pregnancy feels like eating for 1.25, breast feeding is like eating for 17.  It's right up there with fully loaded bike touring in terms of energy demand.  No complaints there--I've been plowing my way through all the delicious food that our visitors have given us, and we've had many great visitors so far, including our New York City relatives: Uncle Jared, Aunt Lauren, Grandma Carol, and Grandpa Dudley. 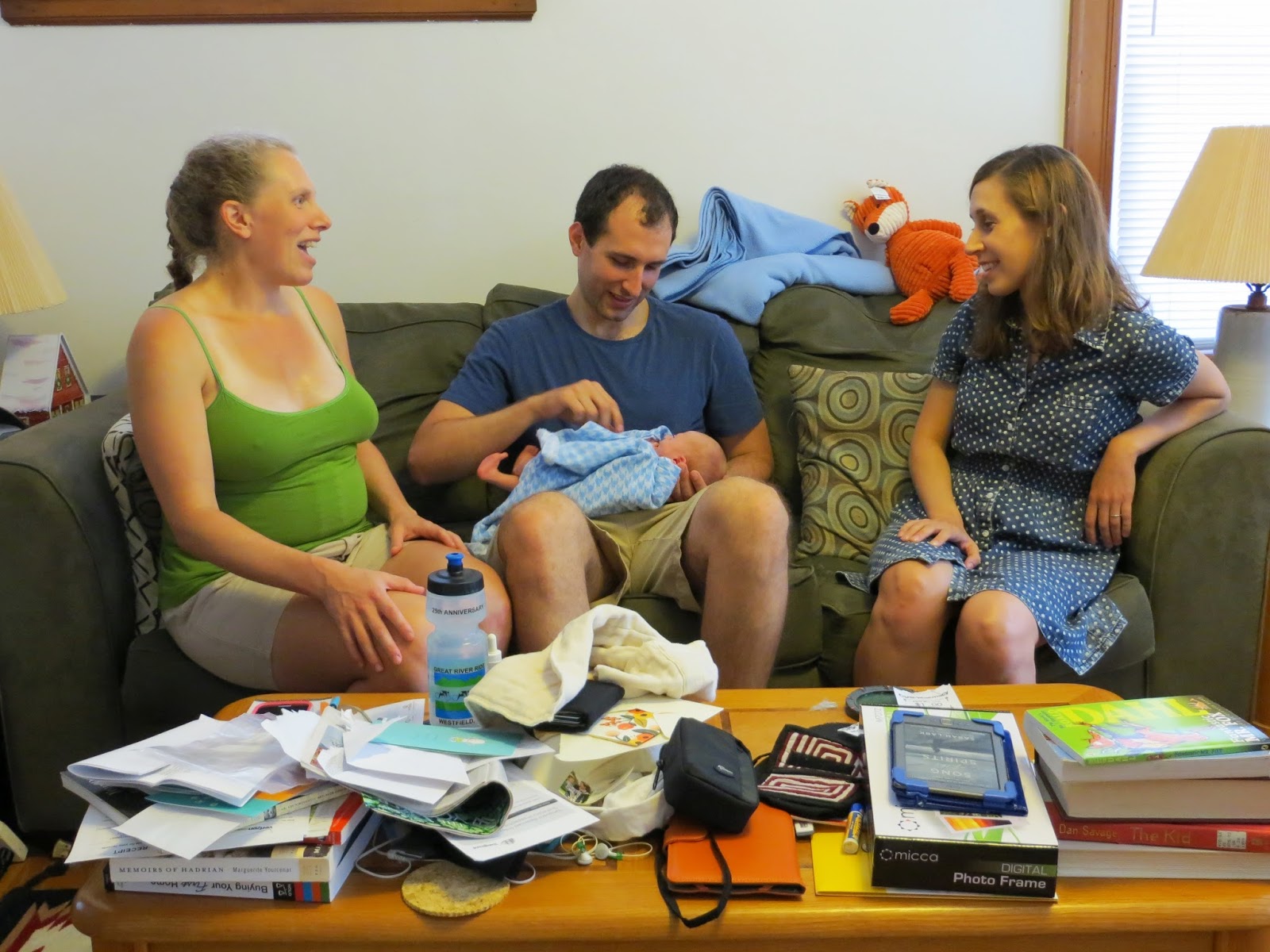 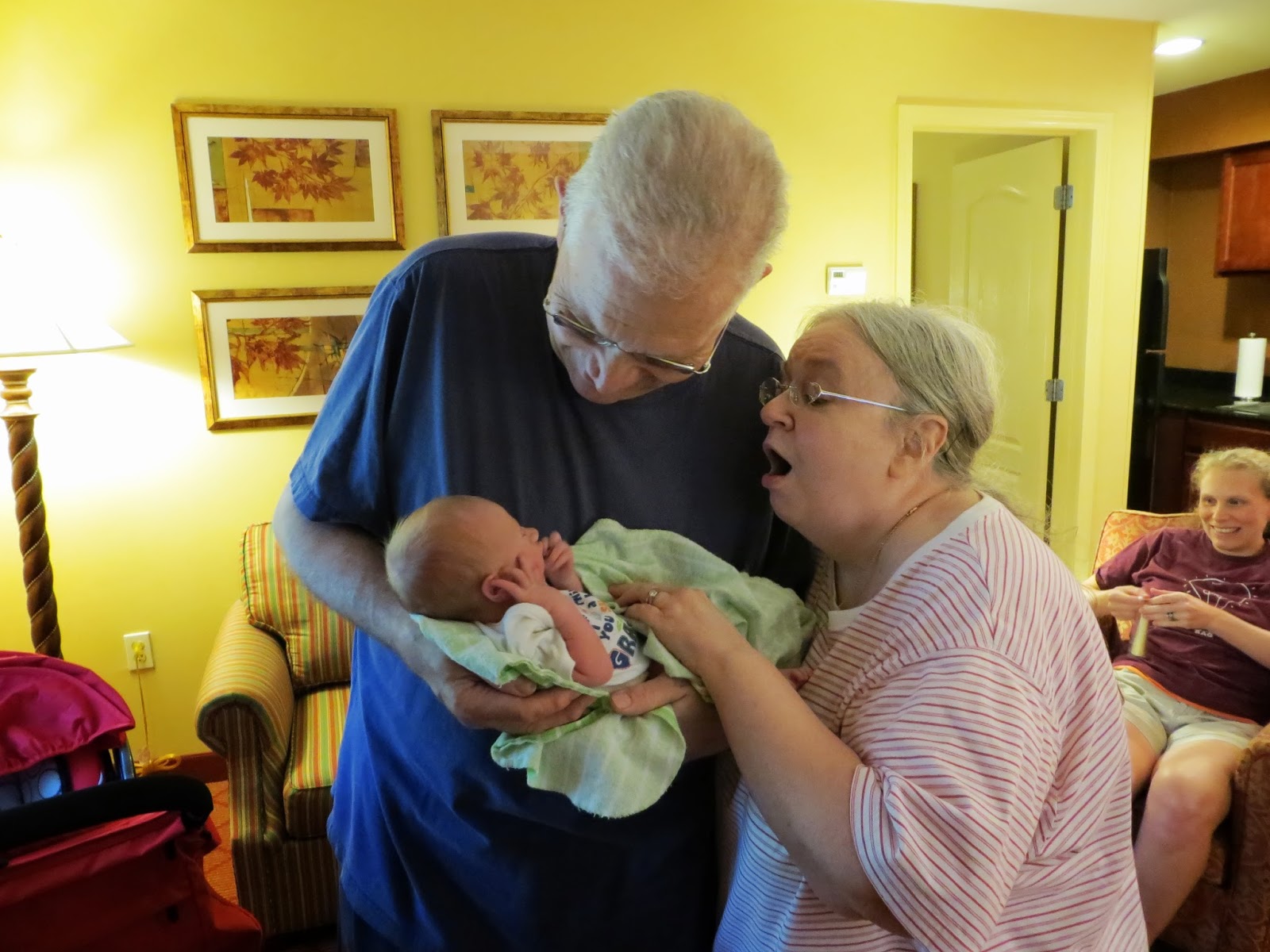 The week was capped off by Lemon's first public transit adventure, aboard the MBTA red line en route to my lab's annual barbeque, where everyone was very interested to meet the little person who had made me change shape so dramatically over the past 9 months. While it was great fun to see all my coworkers again, I have to say I'm glad it'll be many more weeks yet before I have to interact with them in a professional capacity.  I'm sure it will fly by.  Check in next week for updates on Week 2! 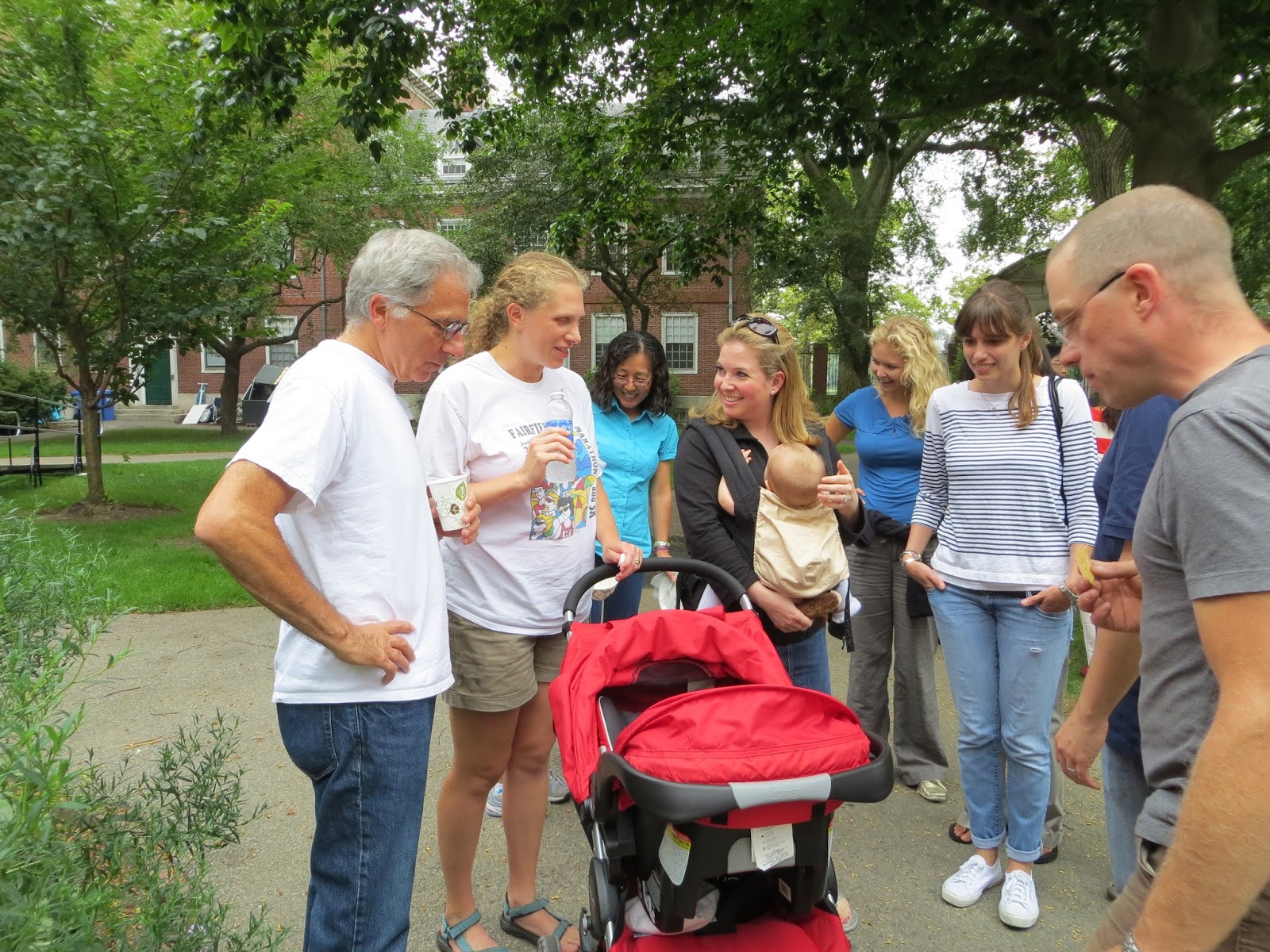